Summer has finally arrived where I live and it reminds me that I was going to make myself a Macramé Summer Bag. It looks like it will be a project for next summer!

Last year I took a Macramé course in Cesena, Italy with Liliana Babbi Cappelletti. A friend and I took the train from Rome on a hot day in May and headed for Cesena where we would spend the weekend enjoying ourselves with other friends at Lilli's home while she taught us the secrets of Macramé.

The first leg of the trip was great, aside from our train being a bit behind schedule, we were in a modern, air-conditioned train car with comfortable seats and a table between us. The trouble started when our train ran more behind schedule and we discovered that it would now be difficult to make our connection. We also discovered that there was to be massive computer system upgrade to the Bologna train station on the very day that my friend had to head back to Rome. Bologna is one of the main connector stations in Italy and most of the northern trains run through it. The computer upgrade meant that the Bologna station would be closed to traffic during the upgrade. With these worries, we arrived at our connecting station and ran to catch the next train, lugging behind us our baggage in the 40 degree Celsius heat. Sweating and out of breath, we pulled each other onto the train and squeezed in with our bags. The train was more than full of passengers and was an old, non air-conditioned model. Packed in tight like sardines in a can we stood sweating a few feet from the door - no chance of any kind of a seat on this train. We also realized at this point that my friend had left her cell phone on the kitchen table at home and we had no way to contact Lilli and her husband who were waiting to pick us up at the station in Cesena to tell them we were quite late. Then, at the last stop before ours we saw a ticket official working his way towards us. Oh no! In our haste to make the connection, we had not stamped our train tickets in the little yellow validation boxes at our connecting station!

It seems most other people had not stamped their tickets either so his approach was excruciatingly slow and he was becoming more and more abusive as he got closer to us. I dug into my pocket for the 10 euros we would need to pay the fine he was going to give us. He was not happy even with those who paid without a fight (and most people protested loudly). Thankfully the suffering was soon over and we stepped out onto the platform to look for Lilli. I was drowning in sweat and felt self-conscious getting into Lilli's husband's nice air-conditioned luxury car.

Things went much better after that and we went to the hotel and had an amazing seafood dinner during which we told our tale of the day's travel woes. Cesena is located about 15km from the Adriatic coast in the Emilia-Romagna region of Italy and most definitely a great place for seafood! After dinner Lilli and her husband took us for a drive around town to see the main architectural delights and then we stopped to take a bit of a walk in the historic centre.

Since we had come for Macramé, Lilli took us to a shop window which had wonderful Macramé purses. These were not the casual Macramé summer bags that I was used to at home. These ones were full of Italian style and far more attractive. It's a good thing the store was closed or I would have been tempted to get one! 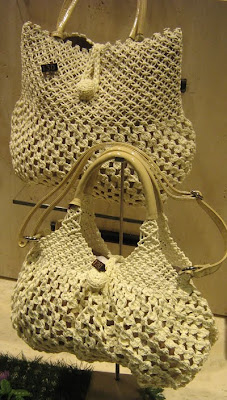 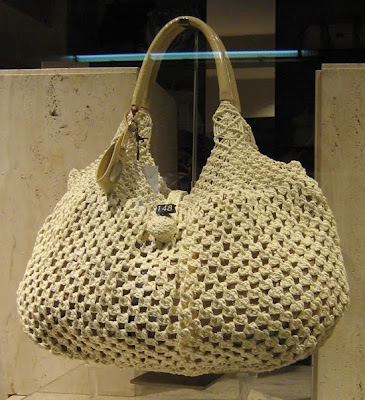 Somewhere in my mind I thought I might make myself one someday... after taking Lilli's course, I was able to identify the different knots. The principal knots on all of these purses were the Nodo Giuseppina (Josephine Knot) and the Nodo Piatto Alternato (Alternating Square Knot). I still want to try making one... one day!

For our class we made the tassel I showed you in a previous post. I'm sure Lilli could make one of these purses easily, she is very good at Macramé – here are two pictures of Macramé borders on pieces she made/was making for her home: 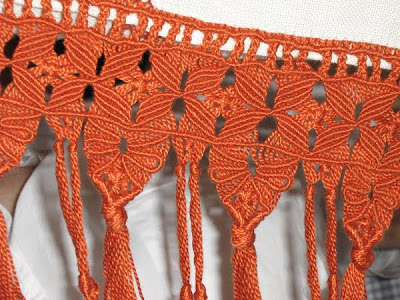 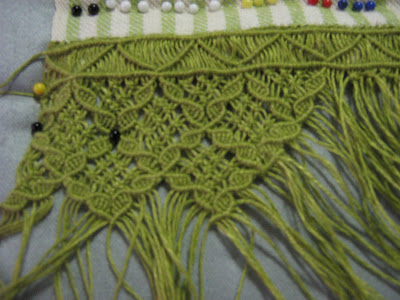 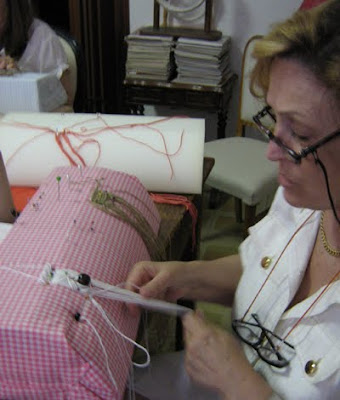 In the end, it was a fabulous weekend, though my friend from Rome had to leave early and spend all day trying to get home due to the Bologna train station closure.

There are some pictures of other Italian Macramé bags here, here and here.
Posted by Jeanine in Canada at 2:30 PM