Whenever I want to investigate something that someone tells me about, I leave their email in my inbox until I can get to it. Sometimes this takes a long time.

Last November, I received an email announcing the 6th Annual Hemp Fair in Gambettola, Italy which was sponsored by the hand-stamped fabric manufacterers Bertozzi and Pascucci. At this exhibition lessons in Savignano Braid Embroidery were offered and in the email was a photo of a cushion done in Savignano Braid Embroidery which was auctioned off with proceeds going to charity.

This is the cushion: 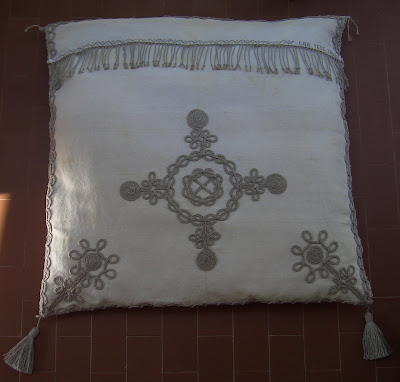 Now, I already knew about Savignano Braid Embroidery, but I was interested in the school that was teaching it as the instructors listed where women that I had met: Cristina Notore and Paola Paglierani of Italia Invita. These two delightful women are co-authors with another woman, Bianca Rosa Bellomo in a book on Savignano Braid Embroidery, and Cristina Notore wrote a beautiful instructional book on Macramé borders called: Macramé in Toscana which is already in it's second printing.

It has taken me 8 months to investigate, but better late than never! The school is called: TALÈA Officina Tessile and is currently holding courses in three different locations: Rimini, Riccione and Bellaria – all on the north-eastern coast of Italy. Cristina and Paola have participated in numerous exhibitions and have won many awards for their work.

If you visit the TALÈA Officina Tessile website, you can check out many photos and watch a video which shows a little of what you might expect to learn in their Macramé courses. Clicking here will show you some of the techniques of needlework that they teach and there are even kits available for the techniques of Macramé and Savignano Braid Embroidery. When I asked if these kits where available for overseas customers, Cristina told me that they are not set up for online sales at the moment but are looking into it. She promised to get back to me with details after summer holidays.

We will talk about Savignano Braid Embroidery next post...
Posted by Jeanine in Canada at 2:54 PM