In the late 19th century and early 20th century, there were many embroidery and lace initiatives in all regions of Italy. Each region developed their own local styles and stitches, initiating schools for educating children and women. Evidence of Casalguidi Embroidery dates back to the 12th century and local antique embroideries were studied and used to inspire new motifs and styles. Like Punto Antico Embroidery which came to mean embroidery using a combination of certain types of stitches, Casalguidi Embroidery (Punto Casale) seems to be the name used to encompass typical embroideries from the area in and around Casalguidi, Italy where examples of this particular style were often found. Ancient examples were rediscovered in the Serravalle Pistoiese region between Lucca and Florence (west to east) and Pistoia and Lamporecchio (north to south).

Casalguidi Embroidery was also known as Punto Toscano and Punto Antico and uses many of the characteristic stitches which we have come to associate now with Punto Antico Embroidery like Satin Stitch, Curl Stitch, the Gigliuccio hemstitching and needle lace fillings for voided areas. At a certain point, motifs of detached Buttonhole Stitch like rosettes, three and four-leafed clover, leaves, animals (real and fantastical) and human figures began to characterize Casalguidi Embroidery. Motifs inspired by the Romanesque ornaments on the churches and other architecture of the area were added along with vines and grapes and the Bastone [stick] motif was developed, the most recognizable characteristic of Casalguidi Embroidery.

Much of the idealization of this technique is owed to Guiseppina Morelli (1875-1960) who, with the help of other women in the early 20th century developed and taught Casalguidi Embroidery to the women of the region giving them means to support themselves by making trousseaux items and household linens and furnishings like: bedspreads, curtains, cushions, tablemats, tablecloths, tablerunners and towels but also purses and small bags, holders for glasses, napkins, handkerchiefs and lingerie as well as covers for boxes and chests and even bomboniere.

The technique achieved national recognition as "one of the most beautiful in Italy" with its inclusion in the Manuale del Cucito e del Ricamo by Cucirini, Cantoni, Coats and a stand-alone manual written by Adele Della Porta in 1915. Casalguidi Embroidery was also much appreciated at the 1904 World's Fair in Milan and the Annual Exposition/Sale of Women's Work in Turin in 1914.

In the 1920s Casalguidi Embroidery was exported by Maria Maddelena de' Rossi to the U.S.

Though the school/laboratories experienced decline after the Second World War and the death of Giuseppina Morelli, the art of Casalguidi Embroidery never died out altogether.

In May of 1998 the Club del Ricamo Casale was founded and today exhibits works in national and international shows and teaches the technique. I bought this small piece from them at their booth in Rimini at the Italia Invita Forum in 2007: 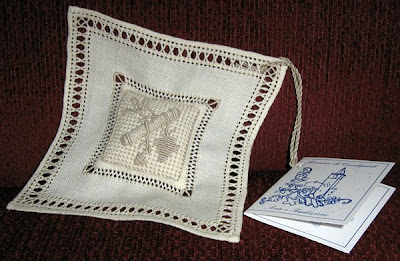 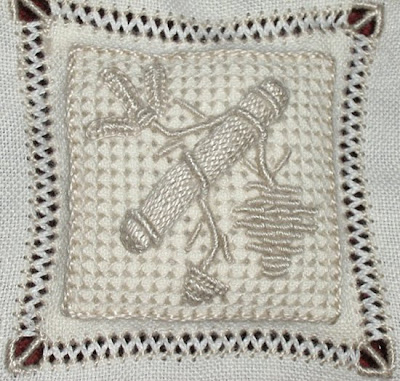 If you get to Pistoia you must go to the Embroidery Museum to see pieces of Casalguidi Embroidery.

The book Storia e Arte del Ricamo, Il Punto di Casalguidi by Paolo Peri (2007) has lots of historical notes (text in Italian) and a didactic section in Italian and English on executing some motifs of Casalguidi Embroidery.

The Club del Ricamo di Casale published their own book in 2009 called Ricamo a Casalguidi which has the didactic section from Paolo Peri's book (above) and more in Italian and English. They also created an instructional booklet for Fiorella Collection which can be purchased from Italian Needlecrafts (please note that Elena is on holiday until July 15).