In the spring of 2007 I packed up my daughter and we went to Italy. It was her first time and I dragged her all over before abandoning her with the kids of embroidery friends of mine so I could enjoy the Italia Invita Lace and Embroidery Forum in Rimini. I thought it was a good deal. I spent nearly two weeks agreeing to her every whim so that in the end, all she had to do was hang out with friends while her mother went crazy. We'll talk about how crazy I went in another post!

At the beginning and again at the end of the trip we stayed with a stitching friend and her family in Rome. One afternoon after fulfilling my daughter's wish to see the Castel Sant'Angelo and St. Peter's Square, we took a side trip to try and find a little shop in Borgo Vittorio called Italia Garipoli Laboratorio. We came along to number 91 to find that the shop was closed. This didn't stop us from pressing our faces to the window to see the embroideries and laces on display inside. My friend's husband found us amusing: 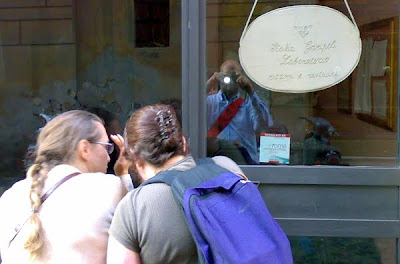 The sign read "embroideries and restorations"... we were intrigued but alas could not go in. In the photo you can just make out some needlework pinned to the wall on the right-hand side. They were lovely drawn-thread works.

The next time I was in Rome was in 2009 and this same friend took us to a different shop near Piazza Navona, Le Tele di Carlotta in Via dei Coronari no. 228, where we met the owner Simona Virgilio and observed a one-on-one lesson being given to a girl who'd come from France to learn Reticello. We bought some lovely pieces of Italian linen there! 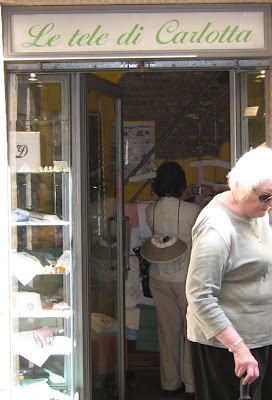 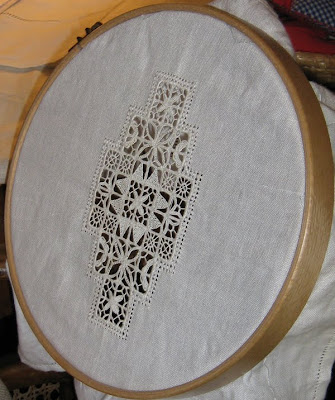 I have a list of shops I want to visit but never seem to find the time, I'll list them here in the hopes that perhaps you might be able to visit them:

Downtown near Piazza Venezia there is Canetta in Via IV Novembre n. 157/B, they are the company that publishes the embroidery magazine Mani di Fata and here you can get fabric, books, patterns and stitching supplies. I have only peered into the window of their shop in Milan, but they seem to have lots of embroidery stuff.

Then there are many textile shops along Via delle Botteghe Oscure near the Ghetto in the Largo Argentina area.

A little ways out of the "downtown" area (you can take the metro and it is apparently well worth the trouble) there is Rinaldi-Decoricamo in Viale di Valle Aurelia no. 61.

I would really like to visit the embroidery school/laboratory CBC Needlepoint in Via Confalonieri n. 1. They do some absolutely stupendous goldwork embroidery.

Please leave a comment if you know of other stores!

Check out this post for more shops in Rome.

Posted by Jeanine in Canada at 4:34 PM