Many people flock to Siena, Italy for the Palio horseraces each year. There is one on the 2nd of July and one on the 16th of August. The prize for winning is the Palio itself which is a painted banner. The right to parade the streets with this banner is the most coveted honour in the city. There is great excitement which builds all year long for these events and periodically throughout the streets of this walled city, you can observe boys in medieval-style costumes from the different Contradas parade, playing the drums and throwing flags in the air. Siena is composed of 17 Contradas [districts]. 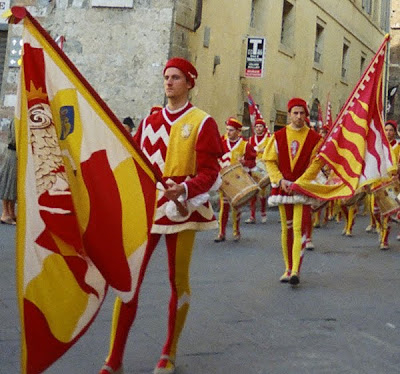 The costumes are very colourful and most have some kind of needlework on them. It is difficult to see this as the boys parade by and you can never stop them in their march so the only option for you is to go to the Contrada Museums. Each Contrada has it's own museum located within its district. They have strange hours and you are well advised to make an appointment to go through but it is worth the effort if you are into clothing or embroidery. 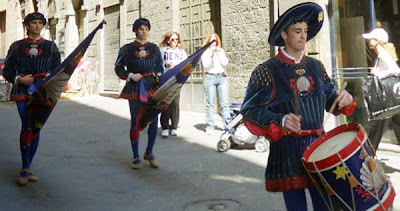 There are several key positions for parading and each position has its own Palio Costume. The alfieri [standard bearers] and the tamburini [drummer boys] are the ones you will notice the most as they are usually the ones in leading positions. The blue outfits seen here are from the Nicchio [Shell] Contrada and are modeled after designs made in 1928 by Umberto Giunti. The fabric is blue silk velvet lined with red silk satin, quilted in rows on the lower body. The tops of the sleeves, neckline, along the sleeve openings and above the hemline are all embroidered with gold thread. The crest is applied and was done in silk shading embroidery with silk threads on silk fabric.

Of course, if you attend one of the two Palio races themselves, then you will see many different styles of costumes as there will be other positions represented and they all parade around the Piazza del Campo in the hours before the race. There are some tens of thousands of people crowded into the square however and you may not be able to see that much, this is why a trip to the Contrada Museums is such a good opportunity.