In 1913 Countess Tarsilla Petitti started a school for girls in a little town called Bricco de Faule (near Turin) in the Piedmont region of Italy. The people of the town were mostly poor farmers and the object of the school was to educate girls and train them in embroidery so that they could earn a living.

The Petitti family was in possession of a sacerdotal robe of richly embroidered fine cambric linen dating back to about the 17th century which they displayed in their chapel. At the time it was made, Church vestments were richly embroidered in what the Italians called Saxony Embroidery (Ricamo di Sassonia) which I strongly suspect is what we know today as Dresden Embroidery.

The robe was finely embroidered in white and silver threads with designs of roosters and peacocks, heraldic double-headed eagles, the emblem of Franciscan nuns, leaves and vines and many different types of stylized flowers. Tarsilla Petitti decided to create designs for her students using the robe as inspiration. Her pupils learned traditional embroidery techniques but became especially proficient at Bricco Embroidery as the embroideries born from the designs of the robe became known.

Instead of fine cambric, robust undyed homespun cloth made of hemp, cotton or linen was used. Thicker cotton threads replaced the fine white and silver ones of the robe resulting in a completely 'new' style of embroidery. Embroidered clothing done by the girls of the school were sold to the upper classes who were happy to support the project.

The outbreak of the First World War robbed the school of its pupils who were needed at home to replace the men who had gone off to war. Tarsilla Petitti then looked to the lower middle class women of the area who needed to supplement their incomes and to local nuns to keep her embroidery workshop open.

Bricco Embroidery took a gold medal at the 1923 Industrial Agricultural Exposition in Cherasco and became well known throughout Italy and abroad.

The Countess died in 1937. This unhappy event and the outbreak of the Second World War signaled the end of her workshop.

The technique had been all but forgotten until a recent revival has sparked new interest resulting in pieces of this unique and attractive embroidery being produced once again by various Italian embroiderers and the publication of the book: Bricco e Cavandoli, due favole in punta d'ago by Gisella Tamagno Gazzola. (Click on the author's name to go to her website where you can see pictures of Bricco Embroidery.)

This is a small purse kit that I purchased from the author in 2007: 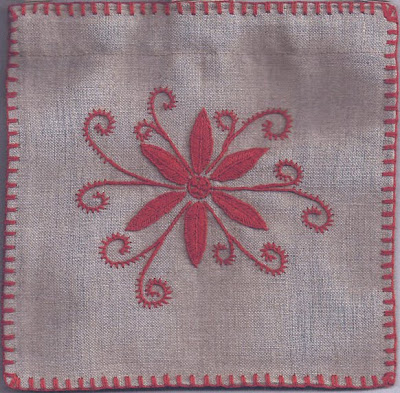 To learn more about Bricco Embroidery, go to Tuttoricamo's website and look under the 'Techniques' heading. While you're there, read a book review of the publication mentioned above: click on 'Books', then 'Other Italian Techniques'.

The book can be purchased at Tombolo Disegni, click on 'Books', then 'Libri Ricami', then 'Ricamo Italiani'. The book has two subjects, Bricco Embroidery and Cavandoli Macramé and is printed in both languages (Italian and English) together. (You must send an email request to make a purchase.)

If you have the Anchor Manual of Needlework, there is a little bit written on this technique with a photo in the 'Italian Embroidery' chapter.

This is a fun Advent Calendar done in Bricco Embroidery: 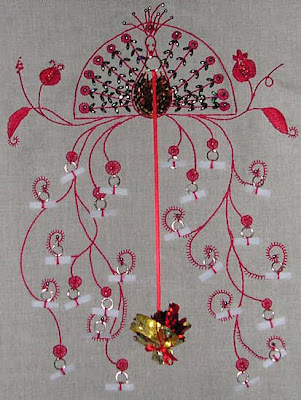 Posted by Jeanine in Canada at 4:54 PM