Jesurum - A lace tradition in Venice

Michelangelo Jesurum opened his first lace-making workshop in 1870 after learning the art of Pellestrina bobbin lace as part of an effort going on in Venice at the time (1870) to revive the ancient art of lacemaking which had fallen into decline. Adding coloured threads to the laces earned a Grand Prize for Jesurum at the 1878 Universal Exhibition in Paris. There is a small picture of the prize-winning entry on the Jesurum website but there is a great picture of another coloured silk thread piece in the book: Il Merletto Veneziano by Doretta Davanzo Poli (1998). There are lots of other pictures of Jesurum lace in this book, as well as a wealth of photos of all kinds of Venetian lace and info (text in Italian).

By the beginning of the 20th century there were seven Jesurum workshops employing nearly 3000 women and the lace was recognized and sought worldwide. 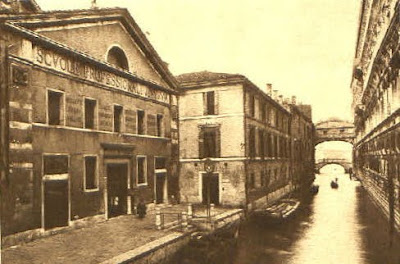 Jesurum became lacemakers to the Italian Royal family and other nobility throughout Europe. In 1906 Michelangelo Jesurum opened a Lace Museum in his home.

World War I interrupted the workshops and halted the market for lace. Jesurum kept many of its workers employed making military uniforms. Only a marginal increase in business after the war put the company in danger of bankruptcy and closure. In 1939 the Levi Moreno family took over the company but kept the name as it was well-known and respected. 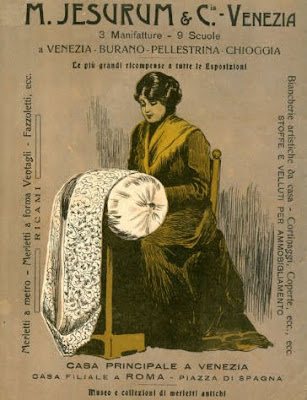 Some pieces from the Levi Moreno family lace collection are on display at the Relais Ca' Maffio situated half way between Venice and Treviso, if you find yourself out that way!

Recently Jesurum is under new ownership and has opened a new store on Calle Larga XXII Marzo, San Marco 2401 - just off Piazza San Marco in Venice where they sell household and yacht linens. 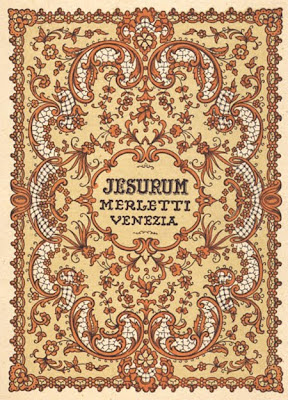 The Online Digital Document Archive has a free, downloadable Jesurum monograph (text in Italian) in which the last paragraph reads: The simplicity of the manual production used in Venetian lace therefore consents the most variety and the most valuable results: a Jesurum lace has the same worth as any work of art and, like a painting could be signed before being offered for the admiration of those who love beautiful things.

There are photos of Jesurum laces in Elisa Ricci's Old Italian Lace (1913), also available from the Online Digital Document Archive.

On YouTube there is an excellent 9 minute documentary on the lace of Pellestrina. Make sure to watch it in 720pHD!
Posted by Jeanine in Canada at 6:50 PM