Recently a friend from Italy sent me a small kit as a gift. I decided to document making the project here. It is a knotted tassel - I love making these and each one is a little different from the other.

The kit is from the Laboratorio Tessile di Alice. Two very talented women are responsible for this workshop/embroidery school: Rosalba Pepi and Paola Baldetti. The Laboratorio's main home is in the 14th century Church of St. Stephen in via San Lazzo in Castiglion Fiorentino near Arezzo, Italy. Now a cultural centre, this church's interior walls are covered in frescos from the late 14th and early 15th centuries. The other seat of the Laboratorio is the 18th century Villa Candida in Viale Roma no. 21, in Foligno, Italy which is also home to a sporting club. Can you imagine going to a needlework class in one or the other of these fantastic settings?

In a recent issue of one of the Italian needlework magazines, I don't remember if it was RAKAM or Ricamo Italiano, there was a photo of a tassel sampler on the wall. A frame with a coloured background and different tassels pinned to it. I really like that idea and was thinking to work my way through the tassels in the book Nappe e Pendagli by Giuseppa Federici... it is still in the idea process but if I do decide to do it, I'll show you how it goes along.

Back to the kit! It is very simple, a piece of cardboard with a photo of the finished knotted tassel on one side and the instructions on the back, some Cotone Povero, (cotton yarn) and a ceramic bead. 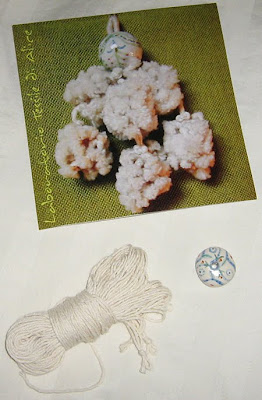 The cotton is precut into six three-stranded lengths with a knot at one end, all ready to get you started on making your knots! 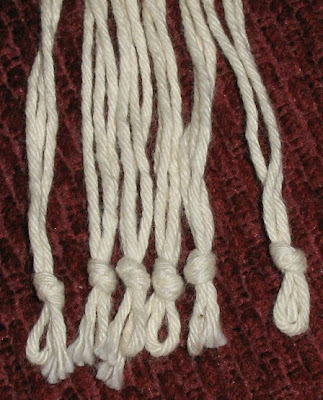 There is also one long length for stringing the pieces together.

I made a series of knots on each length about 1 cm apart and cut them every second knot to get six groups of 20 knotted pieces.

Next I took the long length and doubled it, then put it into a needle and knotted one end. Then I strung the pieces on in groups of 20, placing a knot before and after each group with about 1 cm between each group. 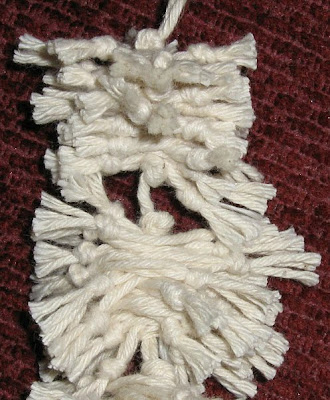 I always pierce the middle of a strand for the first and last piece so they don't slip over the knot that is supposed to hold them in groups.

Then I cut between the fifth and fourth groups so that I had a length with four groups and a length with two groups still on the end of the length in my needle.

I inserted the needle with the two groups on its length through the hole in the bead, made a loop the size I wanted for hanging the tassel and passed the needle through the hole in the bead again, making sure to hang on to the loop on top to keep it the desired size. I caught the length with four groups around the middle; that is: with two groups on either side so that now I had three lengths hanging below the bead with two groups each. I passed the needle back through the bead. At this point it says to overcast the loop that will be used for hanging the tassel. I don't usually do this, but I will do it here as I'm always game for new things! 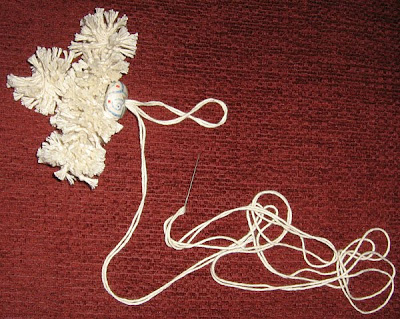 I found that overcasting the loop was the hardest part of the whole thing! In the end I managed it and did my last stitch as a Buttonhole stitch to lock the overcasting in place. Then I plunged the needle through the bead one more time (my lumpy Buttonhole stitch ended up hiding in the hole of the bead). On the other side of the bead I made a knot close to the bead and cut the thread.

Now comparing my knotted tassel with the one in the photo, I notice that the loop on top in the picture is quite small and there is another piece of thread looped into it for hanging. Oh well, mine is quite twisty and I like it! 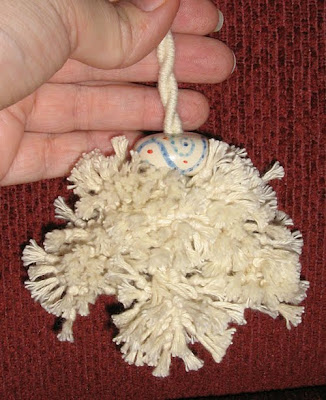 At this point you can move the pieces in the groups around so that they are going every which-way and for added fluffiness, get them wet and let them dry. You get a super fluffy tassel!

You can get the book Nappe e Pendagli from Tombolo Disegni: click on "Libri/Books", then "Libri/Ricamo", then "Ricamo Italiani", the text is in Italian – send an email request to order.

(p.s.: my tassel doesn't look like the photo in the kit because my idea of 1 cm was probably twice as long as it should have been! With smaller pieces, you get the effect of the individual groups whereas mine is a bit of a blob! – I need more practice!)
Posted by Jeanine in Canada at 12:15 PM