In the first decade of the 20th century Elena Albert Mars, a painter originally from Nice, started to apply Crochet made by local peasant girls to a local handwoven hempcloth called Trògio in a small town called Lanzo near Turin. Wool threads were used to execute the Crochet.

Many items were made such as wall hangings, cushions, tablemats, bags, curtains and other household items using motifs of flowers, foliage, trees, fruit and scrollwork.

This style of applied "embroidery" became very popular and was even exported mainly to Norway, the UK and the US. Some pieces were commissioned for the famous shop "Lavori Femminili" in Turin. A delegation of girls dressed in the folk costumes of Lanzo brought a few Lanzo embroideries to Rome and donated them to Prince Umberto and Maria José for their wedding in 1930.

The Second World War led to the decline of this technique and it was all but forgotten for a few decades before being "reborn" in the early 1970s by Ester Fornaia Borla who participated in a community effort to revive the folk art of the area. Researching the technique, she discovered old works kept by the descendants of Elena Albert Mars and she then began teaching the art to others. One of her biggest challenges was to reproduce the handwoven hempcloth which by then was no longer produced. She was able to procure an antique loom and learned to weave from the Scuola di Tessitura [School of Weaving] in Turin. Ester was responsible for initiating several local exhibitions with the proceeds of any sale of items going to charity. 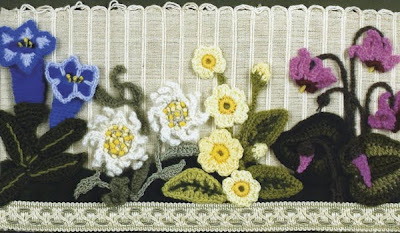 In 1997, after a few years of inactivity, about 20 local women founded the group Ricamare a Lanzo and became part of a larger group called Ricamare in Piemonte initiating annual courses and exhibition. The group is still active today and has participated in the Italia Invita Lace and Embroidery Forums and also their work has been featured in both RAKAM and Ricamo Italiano, two of Italy's foremost needlework publications.

Ester Fornaia Borla is still teaching this technique today and can be reached through the website for Ricamare a Lanzo.
Posted by Jeanine in Canada at 2:24 PM